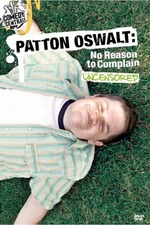 Patton Oswalt: No Reason to Complain

Pretty solid early set from Patton Oswalt is more joke-oriented than his more recent anecdotal stuff but it's still pretty funny. It just doesn't flow quite as nicely, but I've noticed that with a lot of comedians. Their delivery gets better over time. The strange thing here is that the Comedy central DVD just shows the special as it appeared on TV, with the commercial breaks and all the stuff that was cut out cobbled together in the extras pile. You'd think they might have just showed the actual unedited concert. Weird. They do include what has to be Patton's first televised set, which is interesting, in that the first half is just downright strange, with Patton enthusiastically making allusions that no one seems to get, but he settles down in the second half and gets some big laughs. They also include some surreal comedy shorts featuring Patton as a grocery clerk having hilarious misadventures that are more odd than funny. All in all, a pretty complete time capsule collection of the early years of one of comedy's stronger, more consistent performers.