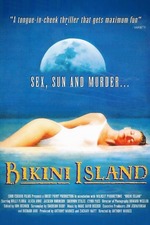 It's quite unfortunate that the first 70-75 minutes of this movie was the equivalent of watching a GIRLS, GIRLS, GIRLS video put out by a knock-off Swimsuit Illustrated. For some 13 year-olds I'm sure that is perfectly okay with them but the film goes absolutely nowhere, except for the beach where we have horrible early 90s instrumental music and original songs playing over montage scenes of girls posing in swimwear.

They bring five girls to an island and with a slasher-fan mentality that's just too few to begin with, if you catch my drift. But when the first few on-screen kills are nothing more than a plunger to the face, it's nothing but disappointment central.

The House of the Laughing Windows