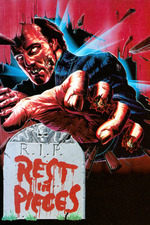 José Ramón Larraz may not be a name you immediately recognize but he's the Spanish director of Black Candles, Deadly Manor and Edge of the Axe.

Following the same trend of the previously mentioned films, Rest in Pieces is high on concept and low on execution, with a heavy emphasis on horrible acting. The lead actress in the movie was SO BAD, I mean, bordering on excruciating to watch. It seems as though Lorin Jean Vail may have watched her own performance and decided to do humanity a favor and quit acting the year after this was released.

Vail plays Helen Hewitt, a young married woman who inherits the wealth and estate of her late Aunt Catherine Boyle (the stunning Dorothy Malone). Once her and her eager husband move into the mansion, they are introduced to the staff and the residents of the estate. Helen's husband, Bob (Star Search winner, Scott Thompson Baker [lol]) isn't thrilled that there are so many people living on the property rent free and his accusatory demeanor leaves the residents plotting and scheming.

Rest in Pieces gets bogged down by poorly-executed ideas and turns into a sloppy mess of confusion with a few cool scenes here and there and Lorin Jean Vail stinking up the movie with her performance.

Are the residents zombies, Aunt Catherine's revenge from beyond the grave, or harmless entities who want nothing more than to continue living there rent free? These questions are very vaguely explored in Rest in Pieces, but it is not presented in an artistically ambiguous style, just shoddily made by an overambitious genre director.

Despite a terrible lead performance, a sluggish pace and some intense confusion, the movie still has that Larraz charm I've come to find a bit endearing.