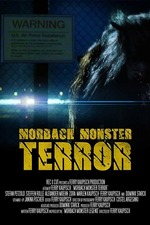 "Action at the fence, moving your way."

Watched this because associate producer Dominik Starck, one of the producers and stars of Iron Wolf, got in touch with me on Twitter and assured me I would like it better. Well, one thing is certain: it's definitely an improvement.

One of the main things in Morbach Monster Terror's favor is its brevity. At five minutes, it doesn't have time to wear out its welcome or include anything extraneous to the action. Second, it's in German, so the main actor isn't forced to speak a language that isn't his primary one (even if he is playing an American soldier). Lastly, and perhaps most importantly, writer/director Ferry Kaupisch had a decent-looking werewolf costume to work with and shot it to its best advantage. I'm not sure how well it would hold up over a feature, but this "quick & dirty werewolf short" (as Starck calls it) gets the job done.