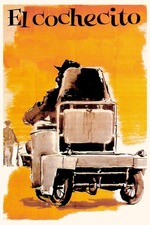 A bleakly hilarious portrait of a lonely, able-bodied widower who wants a motorized wheelchair so he can fit in with a group of invalids. I was not surprised to learn that director Marco Ferreri's co-screenwriter, novelist Rafael Azcona, also co-wrote Berlanga's The Executioner, which also starred José Isbert. Wheels within wheels.