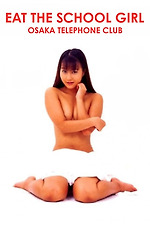 Uhhh, this was pretty weird.

I mean, I didn't expect anything too conventional going into a pinku eiga movie titled "Eat The Schoolgirl". But at the same time, I didn't really get anything I DID expect either.

Certain scenes (often the sex scenes) seem to drag forever, but we also get some pretty cool gore scenes (the one where the girl goes like "my guts are all over the floor" definitely stood out). In the end, it's kind of an unfocussed mess that perhaps tried to be more than it actually is.