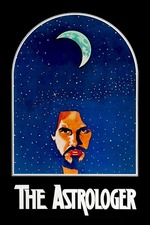 Ever since finding out about this movie a few months back, I've been obsessed with trying to see it. I soon became aware though, that this might never happen, as it's only being seen at sporadic screenings with little to no chance of an eventual home media release mostly due to uncleared music rights. So I tried to forget it. But it kept popping back up in my head every now and then, and when it did so again last weekend, I tried one more Google search and lo and behold... There it was.

I knew I was going in with way too high expectations, and initially came out somewhat underwhelmed, but it started to grow on me almost instantly afterwards, while reading through some other reviews.

It's one of those insane vanity projects by a filmmaker with little talent, but a lot of money. Obviously Tommy Wiseau's The Room comes to mind, as it will in most reviews. The Astrologer's mystical man is Craig Denney, director and star. He plays a travelling circus con-man who through some illegal ruby trade circuit gets his hands on a lot of money and starts an astrology empire. Something like that. It's as ambitious as it is misguided, with Denney himself playing (what he himself probably thought is) the coolest, most successful anti(?)hero in cinematic history. He very much does not have the range to pull this off, though!

I was mostly surprised by how, adequately? this was made. As in, on first sight it doesn't stand out from any other low-budget indie production from that era. Still, it comes with some highly questionable filmmaking decisions, bordering on the surreal, with (popular) highlights including extremely confusing time jumps, overly long montage-style sequences set to (the aforementioned uncleared) songs played in their entirety, Denney's character IN the movie directing a movie called The Astrologer which becomes a phenomenal success (probably my favorite misguided baller move) and the infamous slow motion dinner scene with no audio, set to yet another song played in its entirety. It's quite a sight to behold.

In the end, I do feel like it's mostly the whole mystique behind this movie that makes it the fascinating piece of cult cinema it's become these past few years. Jason Coffman's piece and Jim Vorel's piece do a much better job at conveying this than I ever could, so if this sounds interesting to you, check out their writings.

I'm pretty sure I'll revisit this at some point, and then, now knowing what to expect, I will most likely enjoy it a lot more.