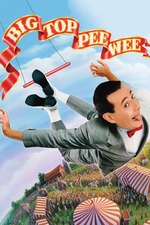 What on earth did I just witness?

Far cry from the Pee Wee I last saw having his Big Adventure. This is an oddly sexualised Pee Wee Herman, not the asexual, sociopathic man-child I so fondly remember. Most of the quirkiness and colour of his surroundings has gone and instead he's living on a farm next to a town inhabited by elderly squares.

Worth a watch but only as a curiosity. Kris Kristofferson is underused and the odd drama/ romance/ love-triangle between Reubens, Penelope Ann Miller and Valeria Golino made me feel uncomfortable. Nobody has any kind of arc, the plot doesn't really do anything and I had this overall sense of nobody steering the ship.

Oh... and Benicio del Toro as a wolf-boy? What an odd sense of foreshadowing that turned out to be.