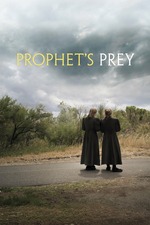 There is a whole conversation to be had about the dichotomy of freedom within religion. For free thinking adults who chose a particular life, then that is entirely their prerogative. However, when children are then born into that life, the choice is removed and their freedom comes into question. This is the same for all religions... and cults.

Amy Berg's documentaties are a sobering exercise in sharing injustices within the institutions that people hold dear. Whether it be religious tinged prejudices that lead to the death sentence of teenage boys or pedophilia within Hollywood and the catholic church, the subject matter shares commonality. Prophet's Prey is infuriating, sobering and utterly befuddling. We live in a world where laws protect the wealthy and "godly" over the safety and welfare of children.

Berg's documentary utilises a kitchen sink approach that shares much in common with Alex Gibney's Going Clear: Scientology and the Prison of Belief. There are harrowing moments and very little levity throughout. This isn't a Louis Theroux puff-piece. The interviews are fraught and dour, the Nick Cave & Warren Ellis score is mournful and the conclusion is unsatisfying and eerie. It's ridiculous that I was unable to acquire this film through legal means in the UK. This is a documentary feature that deserves as much attention as West of Memphis and Joplin: Little Girl Blue.