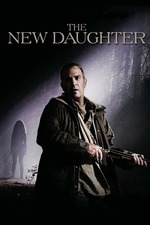 Beggars can't be choosers. I live in Japan, so my choices for films are limited on Netflix. For whatever reason, many Japanese people give a lot of obscure American horror films incredibly high reviews. This has led to me watching some true stinkers. Although, I do understand the high reviews in comparison to many of the films that come out of Japan. Maybe 1 in 7 films will have an interesting plot and decent acting. It's disheartening.

Anyway...'The New Daughter', which is called 'Nest' in Japan for whatever reason. I had a difficult time finding out what I had just watched. Newly divorced dad moves into isolated house with bitter teenage daughter and perfect heartwarming son...and oh, there is a giant burial ground in their backyard. I found it incredibly funny that the father spends SO much time on the computer trying to figure out the plot of the film. I was like yes, I can relate, Mr.Costner.

Quite a predictable story, jump scares, too much happening off screen, and a disappointing finale. The creatures look fantastic. Really, way to go in that department. The plot though...I am going to forget this ever happened in about four days.