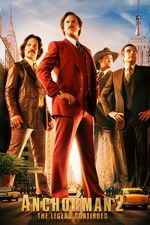 In my experience, the first Anchorman has a strange and captivating charm that toils away in your mind until a solid appreciation for the film manifests. It took me five or so years to entirely appreciate the wittiness that Anchorman and its genial performers have to offer, eventually having my eyes opened when I kept witnessing hilarious quotes tossed about from the film. Disappointingly, Anchorman 2: The Legend Continues has somehow lost all magnetism of the original and instead meanders its way through an insipid narrative and a vast array of lackluster characters in an attempt to revive the beloved persona of Ron Burgundy.

The Legend Continues commences with stability; Ron losing his current anchor gig and must reunite the crew for another frantic escapade so they can perform their one true duty and deliver the news. It's a conventional set up but nothing less can really be expected of a silly sequel; and it of course positions the characters in scenarios for potential belly laughs exclusively due to their creative dialogue and performances. But as we pass the fifteen minute point it all seems to descend into hit and miss Saturday-Night-Live-esque sketches that neither boasts coherence nor steady laughs/giggles. The writing uses the first film as a crutch for its gags; frequently reusing material in the form of blatant references and rarely venturing into fresh territory.

It soon becomes apparent the slot this sequel will fall into. Will it be an original and daring take on this iconic universe or will it attempt to mimic the success of the first film? It is of course and unfortunately the latter, with scenes winking at the first installment in such a forced way it becomes hard to stay invested in this film, instead thinking about the greatness of the first. The catchphrases and oddly detailed exclamations Burgundy professes from the first film are attempted here, but don't have the same zing or originality existent; neither does the ridiculous events transpiring, which are, as aforementioned, insipid, but also inept in their execution.

The story rolls along for over two hours, only once becoming wholly engaging and jolting. An undeniable quality of the first was how sharp and fast the movie progressed; if a scene didn't work, the film moved at such a rapid speed that the failed gag will be forgotten with ease. The Legend Continues has patches of blandness that is only cured due a celebrity cameo (and there are some great ones) or the scenery chewing performances. It definitely required a tighter hand in the editing department, as many scenes could have been cut altogether.

Don't get me wrong, scenery chewing is exactly what this movie requires, and thankfully all the actors aren't afraid to bump up their zeal to 11, even when the story and writing does not follow the same rule. Will Ferrell does a commendable job becoming lost in the Burgundy psyche, meshing with his beloved character very well. The rest of the gang provide entertainment solely due to their bouncy performances. David Koechner, Paul Rudd and Steve Carell all propel the energy higher with each scene they are in with their preposterously entertaining portrayals.

The story falls flat thanks to a heavy dullness and lack of intrigue spread throughout the narrative. The film is at its best when it decides to drop the story and go on a rampage of hilarity, which again, only happens for a small period. When all rules are discarded and comedy is simply allowed to flow, the film certainly picks itself up. If the entirety of The Legend Continues followed the rule of no rules, then there's no doubt this would be a more pleasing experience. But as it is, the film radiates the qualities of a tiresome rehash and mediocre follow-up; it was one that I rarely enjoyed.

"I can always guess how many jelly beans are in a jelly bean jar, even if I'm wrong."