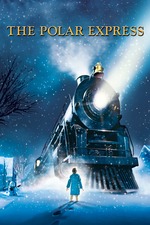 Everybody has that film they watch on Christmas Eve religiously (no pun intended). For some it's Home Alone. For others it's Die Hard. But whilst these films are beyond excellent, I always watch The Polar Express. I think I'm in the minority here when I say that The Polar Express is my favourite Christmas film. I find that it encapsulates the feeling and the spirit that exists at this time of year like no other movie. I really connected with the young boy, facing the dilemma weather Santa is a man or a myth. We all had that moment, and just like this boy, I used to lay awake anxiously at night just to hope in hearing a noise or even catching a glimpse of St. Nick himself. It's a magical film and there's nothing better than getting that warm, fuzzy feeling and tears in my eyes as the credits roll, and suddenly realizing it's past 12am.

I understand the complaints about this film, and they're all totally valid. It being too melodramatic or the animation looking rather frightening. But, even though, like I said, these are all reasonable complaints, I love these qualities. Sure, it does get sappy towards the end, but It's that kind of sap that you can't help but adore and get fully involved in. And if you ask me, I think the animation is revolutionary. The motion capture was freakishly real, which helped me connect with the characters even more. And it left me in awe at times, with the extensive facial expressions and the marvelous voice acting to accompany it, it's hard for me not to be bedazzled.

There's a great layer of mystery to the film. Of course involving the existence of Santa, but also with the abandoned streets at the North Pole. It gets a little creepy at times, but this just makes the mystery more interesting and gives the film an absorbing atmosphere.

I just can't stress enough how brilliant the visuals are in the film - there are sequences that literally made my jaw drop. Some of my favourites are the train drifting across the ice, the skiing on top of the train, the floating ticket (reminsicent of the floating feather in an earlier Zemeckis film) and the whole North Pole adventure. Spectacular.

The score by Alan Silvestri is filled with wonder and magic. Just hearing it makes me think of the spirit of Christmas, which is exactly what was asked for. And sure, every now and then it may sound a tad like the Edward Scissorhands soundtrack, but this is still a remarkable piece of work. Some of the emotional moments definitely wouldn't have worked as well with a weaker soundtrack.

Once again, this is my favourite Christmas film and one that will be part of my Christmas eve tradition for a very long time.

P.S. Elves with Boston accents should be a thing