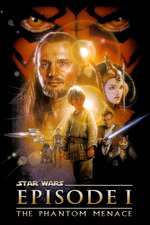 I HAVE A BAD FEELING ABOUT THIS

1999's THE PHANTOM MENACE might be the most indefensible film I have ever seen. Despite (a.) over a dozen years' incubation and (b.) the artistic freedom of a billionaire creator, this was just a disastrous chapter in the narrative which essentially concludes in RETURN OF THE JEDI.

Until 1999, that narrative--spanning three films known as Episodes IV, V, and VI--was a delightful fairytale in space (the opening "A LONG TIME AGO IN A GALAXY FAR, FAR AWAY...." is code for "ONCE UPON A TIME...."). Like all fairytales, it drew strength from its pure fantasy; even incorporating magic, which it called The Force. As such, although it had great universal metaphors, it avoided real-world correlations. Its symbolism was always indirect, in other words, not direct. Again, the stuff of fairytales.

Yet THE PHANTOM MENACE, a.k.a. Episode I, sabotaged that scheme by insisting on new correlations between its story and our reality. See, in plain symbolic strokes, THE PHANTOM MENACE claimed directly that The Force's midichlorians correspond to our mitochondria, "The Chosen One" Anakin corresponds to our Jesus Christ, non-human aliens correspond to our races/stereotypes, and so on. All those claims violated the spirit of Episodes IV, V, and VI.

I have to conclude that, by the late 1990s, creator George Lucas must have no longer desired to tell a fairytale. He must have wished to speak more directly to our real world ... describing, especially, the psychological origin of hatred (to his credit, using his Anakin character, he successfully showed how innocuous the origin of hatred can seem to be).

All of that might have been perfectly fine, if only Lucas hadn't tried to mix such non-fairytale elements into what's clearly a fairytale. Since his agenda was completely new, he should have introduced an all-new mythos with an original brand name: a totally different franchise. Then he wouldn't have needed to drag in the far-far-away galaxy setting and definitely wouldn't have disturbed his past artistic commitments. Or at least he should have shunned the burden and title of Episode I (rather, making an offshoot adventure like SHADOWS OF THE EMPIRE). Maybe then he could have found a way to improve THE PHANTOM MENACE's ramshackle plot, absurd dialogue, flimsy worldbuilding, and dodgy characterizations. I'll say no more about those, since my review is perhaps harsh enough already; go see Mister Plinkett!

Without a doubt, the storytelling approach of THE PHANTOM MENACE, and its next two sequels, required a wholly non-fairytale construction. But instead, to keep profits safe, Lucas made an unfit addendum to his popular space-based fairytale. Basically, the world's richest filmmaker, circa 1997, was afraid to put creative concerns ahead of business concerns. It's no surprise that old Mister Plinkett, and countless others, easily have found so much to criticize. Deep down, Lucas never truly wanted to make another "Star Wars" Episode. Thus, his art suffered catastrophically. And I'm left imagining how good it very well could have been, if it hadn't been oddly grafted onto the three fantastical vintage Episodes.

Finally, in passing, I note that this flick broke the series's custom of giving ample screen time to R2-D2 and C-3PO. Those droid characters were designed to be our dear "friends" in the far-far-away galaxy. Their relative absence, in Episode I, stymies it even further. I miss them a little (Artoo somehow has the most HUMAN line in the film when, in non-human droidspeak, he quips that Threepio's "parts are showing").

POSTSCRIPT -- In case you're wondering, I give two stars to the whole six-chapter saga which concludes in RETURN OF THE JEDI. Not bad, I guess, considering the huge mismatch in its eras--classic vs. prequel.