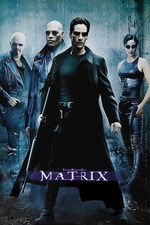 It's the nature of all fiction to raise those questions about reality. That's because fiction is imaginary yet it touches the-here-and-now. With sufficient force to be perceived as real, in most cases.

Well, what follows is a review of a work of fiction that not only raises those questions, it shoots 'em at you with machine guns. THE MATRIX, as a smart allegory, shows how our world is indeed illusory--"There is no spoon." If that's not interesting enough, THE MATRIX also (allegorically) says the illusory aspect enslaves us. Such ideas are conveyed by protagonists named Neo, Trinity, and their Captain, Morpheus. Plus their mystical benefactor, The Oracle.

Honoring William Gibson's novels, THE MATRIX's in-story illusion is, itself, called the Matrix: a virtual-reality world which masquerades as a physical world. As Morpheus explains, "It is the world that has been pulled over your eyes to blind you from the truth: that you are a slave ... ." He and his crew battle the Matrix software, hoping to terminate its sham world. Shootouts, bullet-time effects, and wire fu fights ensue. The action is intense, and so is the symbolism.

However, if taken literally, instead of allegorically, THE MATRIX tends not to hold up. The reason is that THE MATRIX's worldbuilding rules are often senseless, economically and structurally. And even when the rules make sense, they sometimes get broken if the plot dictates it.

Hmm--would Morpheus admonish me for worrying about rules at all, though? After all, Morpheus describes the hated Matrix as "a world that is built on rules." Am I missing the whole point of the character Morpheus: that rules shouldn't matter???

Let me think this through ... my premise, that some types of rules deserve respect, could seem at odds with Morpheus. On the other hand, even Morpheus approves of selected rules. For instance, Morpheus thinks that Neo shouldn't repeat The Oracle's words. Also, Morpheus wears clothes and his crew does too. In practice, Morpheus finds these and other rules important. Similarly, at one point he says that certain rules are for bending only, not breaking. So I believe my worldbuilding concerns might be valid, even by the standards of Morpheus and THE MATRIX. This movie hasn't entirely put itself above such concerns.

Hence, I insist that its world-rules needed more focus. Yet, except for apparently illogical worldbuilding, I consider THE MATRIX to be a very rich, fantastic story. A masterclass in pacing, as well. In fact, I would have awarded five stars, despite its logic flaws, if only it had lampshaded those flaws better. As it stands, the main characters are just too astute for me to believe they could be so totally unfazed by their nonsensical surroundings. Seriously; human bodies as batteries--? An incessantly "scorched" sky--? "Idiot Ball" enemy tactics (see TV Tropes)--? Thus I cannot go higher than four stars. A solid four, with much enthusiasm! I wished for a little more attention to details, to match the wise characterizations, that's all.

POSTSCRIPT -- In case you're wondering, I give two stars to the full "Matrix" trilogy, as a whole. Basically, the franchise peaks early, then it languishes.