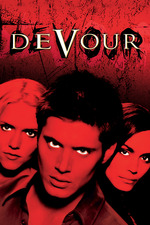 This is bad and confusing. I really have no idea what happened. Something about the devil and a computer game, but it pretty much abandons that halfway through the film.

Also, William Sadler is listed as "Bill Sadler". Bill Sadler is like Mike Bolton. It's wrong. That should have been an indication that this was going to be worthless. It's stupid. Don't see it. Even if, like my wife, you love Jensen Ackles.