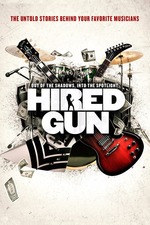 Looking at the current Billboard charts, there are an awful lot of solo artists in the top 100. Coincidentally, this documentary is about many of the unheralded "side men/women" in the industry. Hopefully this doesn't crush anyone's fantasy, but Ed Sheeran and Post Malone featuring 21 Savage and Camila Cabello featuring Young Thug can't make the top 3 without some backup musicians. This film is their story.

Ok, I have no Idea what a Post Malone, 21 Savage, Young Thug, Lil Pump, Cardi B, Sza, Portugal the Man... Ok, I'm going to stop. People need to quit listening to terrible music. I know you're supposed to feel old when you're like, "Kids these days...", but seriously. This is awful. I don't feel old. I feel like I have good taste in music and kids don't. There's two artists whose names contain "A$AP". I mean, what the hell?

For about 90 minutes, it chronicles the ups and downs of being a hired gun. There are a couple of in-depth profiles, but for the most part, it hops around a lot, which is too bad. I'd like a little more focus, but I'm also of the opinion that a good documentary can never be too long. I'd be up for 4 hours of this. There's a little "dirty laundry" here, and clearly some bitterness, but there's also some excellent music and some good stories from some fantastic players.

It's rather heavy on music and artists that were more popular in the 80's and 90's, which is fine with me as I'm not terribly fond of current popular music. Odds are, you've heard most of these artists on the radio hundreds of times in your life, even if you don't know who they are. I may not have much musical aptitude, but I do have a fondness for great musicianship, and this film celebrates it. If you like a quick film that's full of good music, check this out. If you're sad that "Wanted You" by NAV featuring Lil Uzi Vert dropped four spots this week, this film probably isn't for you. Also, please tell me why everyone has a "Lil" in their name now. In the top 100, there's Lil Pump, Lil Uzi Vert, Lil Wayne, Lil Xan and Lil Yachty. Also, something called Lil Peep died the other day. I've never heard of him, but he had face tattoos and probably sucked. So, if you know why this "Lil" thing is happening, please let me know. I'm genuinely curious, and I have no relatives that are in the "Lil" demographic.

Alice Through the Looking Glass