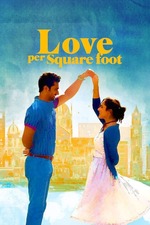 I am really surprised at the quality of films Netflix has produced and distributed themselves these days. Turns out that it's not just Hollywood, but film industries from other countries too have submitted films to this streaming platform giant - including India's "Love per Square Foot".

Given so, you might start thinking this film is a social drama that's supposed to be either inspiring or very touching; or probably even both. But no, "Love per Square Foot" is actually a mainstream Bollywood film that only features a story we almost have never seen before. It could've gotten a theatrical release instead. I mean, even myself as a film student never thought that people would actually make something about how their common dream of living in an apartment by themselves can make two people; complete strangers, to fall in love. Maybe someone else does, but absolutely not me.

Vicky Kaushal gives the best out of his performance here, and his chemistry with fellow debutant Angira Dhar is just one of the things that kept me at the edge of my seat while watching this film; alongside the story, of course. As I said, this film is pure fun and there's nothing that special about it other than it's popcorn entertainment with a concept that's as fresh from the oven.

And yeah, Ranbir's cameo - who ironically will co-star alongside Vicky in one of the year's biggest blockbusters "Sanju" (I'm not sure which one came out first), at the end is totally a treat.