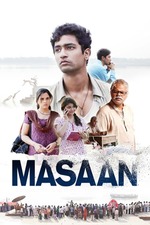 I still can't believe this is Vicky Kaushal's debut film. No wonder what's to come in his filmography after this.

"Masaan" is an anthology film, but not the usual kind as the stories of these characters slowly interconnect especially towards the end of the film. Vicky is great in his debut role, but so is Richa Chadda as Devi and Sanjay Mishra as her father - personally a surprise for me as I have not heard or seen these actors before (except Sanjay-ji though; his face looks familiar). Pankaj Tripathi also offers a fabulous addition to the cast, despite his limited screentime. Again, I don't expect too much from it and I am so glad as the final film of the day - I got to enjoy this film even more than, no offense - "Love per Square Foot" and "Zubaan" combined.

I was touched and moved by the story at the same time, even though I have to admit I kinda want to punch that police officer in the face at the beginning as he's become such a complete asshole through the film. But I still don't get it why would the police arrest someone who's just having sex? I think I'm missing something here, gotta look back and check.

So yeah, I think this is my favorite Vicky film so far. Or maybe not? Maybe his segment in "Lust Stories" is still my favorite.