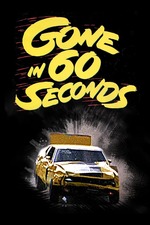 alternate scores aren’t necessarily a bad thing - especially when licensing issues emerge - but the cynic in me makes it seem like a way to make the film seem even more ‘awesome’ and up to date with Disney’s multi-million dollar remake. this wouldn’t have ever received a DVD release without Disney returning to the concept.

it’s a complete reworking that replaces song lyrics with instrumental pieces, laying over new pieces that played without music before. without a song about Superman and Lois Lane, the visual juxtapositions are lost on the viewer and a reference to Superman in dialogue earlier on isn’t followed through. GONE IN 60 SECONDS is reduced to a rolling display of text about car safety in the racetrack, not the title song. the entire soundscape is rebuilt with greater intensity, sometimes it adds immersion but many times it’s too much. dialogue becomes drowned out where it’s harder to follow the film’s narrative; radio announcements and the airport tannoy are absent, removing an integral part of the period setting. the wedding is no longer a cultural ritual.

telling viewers to suck up the changes in the making of documentary? not a good move