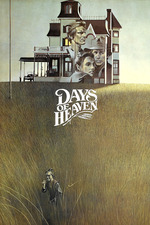 My third Malick film comes with Malick's second ever feature, 1978's Days of Heaven and well, I have no idea what to think about this; on one hand, this is a breathtaking film which captures life in the 1910s so well along with giving me some of the best cinematography I've ever seen and some of the best music I've ever heard yet on the other hand, this is a film which has editing and transitions that I wasn't a fan of as they make the feature seem a little unnatural and weird and this also features a lot of scenes which just feel pointless.

That is my problem with Days of Heaven. Do I like it? Do I dislike it? I honestly don't know but thinking about it, I'd say I loved it. I had issues with the pacing as it felt a bit off but I didn't find it to be boring at all and while I appreciate Malick's dedication to only filming during the "magic hour", it left this sort of strange jerkiness between each scene. But even with my problems, there's still so much to appreciate. I cared a lot for all the events going on, each scene was gorgeous, the score was amazing, and the scenes were depicted so perfectly that it felt like I myself was in them and I'm mainly speaking about the "locusts" scene.

Overall, I'm a bit mixed on my thoughts about this film but I'd say it's probably my favourite from Malick so far and it's a truly amazing film. Now having been accustomed to Malick's style, maybe I should revisit The Thin Red Line because I wasn't a fan of it when I first watched it and I still consider it the most boring film I've ever seen. I'm still thinking about Days of Heaven and how it impacted me. It made me feel unexplainable emotions and the more I think about it, the more I love this but I also kind of dislike it...i don't know what's going on anymore. For now, I'm just going to say this is a wonderful, spectacular, emotional, and truly magnificent feature which I guess I adored. Go watch it and form your own opinions.