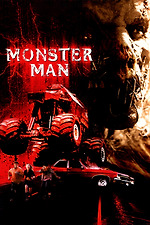 After I found the masterpiece Condorito, I moved onto the next suggestion from Bleart and Marvin, 2004's Monster Man and surprise surprise, I've found another masterpiece!

The cast is loaded with amazing actors such as Eric Jungmann from The Faculty and Not Another Teen Movie, Justin Urich from The Rage: Carrie and Lake Placid 2, and Aimee Brooks from Critters 3 which has some indie actor called Leonardo DiMaprio or DiFaprio in it. All the performances are truly magnificent and I didn't even mention Michael Bailey Smith who played the brilliantly written antagonist.

Moving on from that, the pacing and tonal shifts are perfection while the horror elements are terrifying. There is so much perfection in an hour and a half and this truly is a masterpiece. Go check it out since it's on youtube in amazing quality!