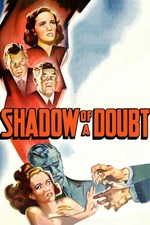 Hitchcock is the master of suspense. He is a true genius and what he's done as a filmmaker is revolutionary.

I expected to not enjoy this film that much but it's just so good! It was ahead of its time and so many aspects about it are superb! Cinematography, score, acting, and writing. All incredible.

So, what held it back from a 5/5? A few reveals felt cheap and a bit lazy, some performances were pretty bad (I'm referring to the kids who play Ann and Roger. Their characters are also really annoying and the mother was also pretty bad), and the film just felt too over-the-top and overdramatic.

A small nitpick I have is that the detective, Jack, is pretty creepy. Maybe that's just how I feel but he felt really creepy when talking to Charlie (the girl).

Other than those small tiny problems, this is an amazing film which I adored. Joseph Cotten and Teresa Wright were lovely, the writing was fantastic, and the shots were beautiful.

I can't really describe how good of a film this is so go read this lovely review which perfectly encapsulates the greatness of this film.

A Ranking of Every Alfred Hitchcock Film