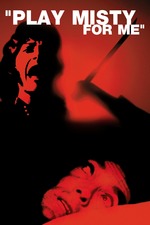 Play Misty for Me

"Play Misty for Me," Clint Eastwood's directorial debut, is one of those post-sexual revolution films like "Looking for Mr. Goodbar" that explores the consequences of seemingly-free love, the horror stories that come with casual sex. The obsessive, stalker female antagonist in "Misty" is of the variety that mostly afflicts those with celebrity, though, the kind of story Stephen King would relate over a decade late in "Misery." A common criticism in reviews of this movie is to say Clint's DJ protagonist deserves what he gets for sleeping with a random, crazy stranger, but that's the whole point of the film. A character is punished for being a slave to his passions. Later Clint flicks like "Every Which Way but Loose," "Unforgiven," and "Gran Torino" were noteworthy for finding Clint doing a fresh take on (or just outright subverting) his usual tough-guy persona, but he does just that in his first movie. Clint, the snarling gunslinger, the no-nonsense cop, casts himself as the victim in a slasher movie.

Clint has a reputation for being a no-nonsense, efficient filmmaker, turning in films on time, under budget, with a product that is lean and mean. This film sets that precedent on the books, but it's interesting to watch Clint indulge in those first-time director flights of attempted art-house fancy. There are seemingly endless dialogue scenes where Clint takes long walks through forests and on beaches with his love interest, editing together an impossible conversation through shots of them in various outdoorsy locales in Carmel, California. Clint isn't so much interested in the dialogue as he is obsessed with the wilderness and crashing waves around his home. These sequences tell us a lot about the director, but they slow the movie down to a crawl. It becomes unintentionally hilarious when these little walk-n'-talks with his gal pal become full on wilderness sex scenes that could only exist in a movie from the early seventies. Clint is not only a great lover of women, he's a great lover of jazz, and a long, sleep-inducing jazz festival sequence follows the long forest sex sequence. It's a large chunk of the movie that could have, and should have been removed for the sake of the story, but it's there, because the director likes it. These plodding bits kill the plot's momentum, which is a shame, because Jessica Walter is terrifying as the crazed stalker, and the movie would've been better served without such large gaps without her. Also, the house Clint's character lives in is distractingly bizarre, it makes the Jungle Room at Graceland look tasteful.

"Play Misty for Me" is a decent debut for Clint. It hasn't aged well, but it's a must for fans of Clint as a director and as a star. It's interesting to see Clint get bogged down in his obsessions, but also do a few of the things he would become known for as a filmmaker.