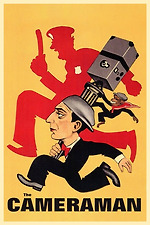 Buster Keaton signing to MGM was the beginning of the end of the best run a comedian has ever had in movies, but he had one more classic in him. Peter Bogdanovich was dismissive of "The Cameraman" in his excellent Keaton retrospective documentary, "The Great Buster", and sure, it's not as death-defying and eye-popping as "Sherlock Jr." or "The General", but it's still incredibly fun and hilarious. I watched it with my wife, who had never seen a Keaton film (and didn't want to either), and she ended up laughing the entire time and gasping at Buster's stunts. His first film at MGM was great, it's too bad the rest didn't really stack up.