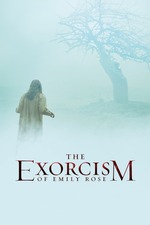 The Exorcism of Emily Rose

The made-for-TV version of "The Exorcist."

Like "The Exorcist," "The Exorcism of Emily Rose" takes themes of faith, religion, God, Satan, and the supernatural seriously, and this works to its benefit. Jennifer Carpenter is otherworldly in the titular role, Laura Linney is solid in the lead, and I'll watch Tom Wilkinson in anything. The movie has some scary moments, and the Rose family farm is a spooky setting that makes for some memorable moments.

The problem with the film is the courtroom drama hook that ties the story together feels like the sort of theatrical TV legal drama that gets churned out by the networks. The proceedings are mostly flat, and the players involved are nasty to their witnesses to the point where it feels unrealistic. It's also a movie you'll nitpick if you have more than a passing familiarity with Catholicism. Campbell Scott's prosecutor arguing that a teenage girl who has been to Catechism classes would probably therefore be able to speak Greek, Latin, Hebrew, and Aramaic is so stupid you can hardly take the rest of the movie seriously if you've actually had a Catholic education. The explanation he gives about vocal chords is also, well, wrong.

These are silly mistakes, but the film's earnestness at doing a horror film around religion that takes its topic seriously gives it some weight it wouldn't otherwise have. It's no "Exorcist" though, or even "Exorcist III."

Singin' in the Rain