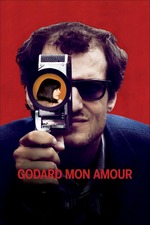 The film opens by telling the audience that Anna will be the one telling this story — but frustratingly, she was hardly present. It’s a Godard biopic, yes, but also the story of the downfall of his marriage. Yet, Anna’s character felt entirely dependent on Jean-Luc, she didn’t seem like an individual. Maybe, that reflects Godard’s contradictory personality and his restrictive control of Anna, but personally, it was just annoying. I fucking hate the male gaze.