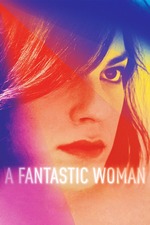 Following up on Gloria, his 2013 Paulina Garcia starring effort that brought him to the attention of the wider world, Sebastian Lelio’s latest is again a relatively low key portrait of the struggle of being a single woman in the world we live in. Where his previous effort dealt in middle age, in loneliness following divorce and the chicks having flown the coop, Lelio here focuses his lens on both the trans experience, on the experience of being not just a fantastic woman but the other woman, on grief, unrelenting and ugly, on a person being judged not on what she’s going through but who she is.

It might be in that area that A Fantastic Woman comes closest to being fantastic. No monologues or earth shattering conversations allow Daniela Vega to express all that hangs over her head across the course of the movie. It all comes via action, feelings communicated via character and plotting, a work of understated grace, as was the case with Gloria the magic again is all in the details.

The movie it reminded me most of is probably Kieslowski’s Blue, Vega may not be Binoche, her face may not instantly speak a thousand words, but Lelio’s screenplay, penned in collaboration with regular writing partner Gonzalo Maga does the heavy lifting for her. To the actress herself in just her second on screen acting role is left the job of conveying without the aid of verbal means her vulnerability, the mask that covers uncertainty every step of the way, a certain feeling of someone just trying to live their life in peace without the judgemental eyes of the world upon them, and the way in which she learns to live with it.

It’s a beautiful turn, effortlessly natural, impressively physical, in a role that doesn’t ask too much of her yet gets exactly what the movie needs. That being an often painful, harrowing portrait of a character that could have easily been defined by its grandiosity instead brought to life with subtlety at every step without ever losing an ounce of its gripping, engaging quality that further establishes Lelio alongside Larrain, putting Chilean cinema in a realm of classiness not too many others are matching right now.