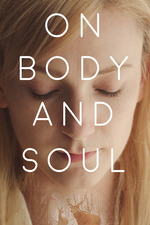 Now that the art form is well over a century old you might forgive the fact that there’s seemingly very little originality left in mainstream narrative cinema. Hungary’s Ildiko Enyedi, winner of the Cannes Film Festival’s Camera d’Or all the way back in 1989 has gone at least a little way to redressing that problem with her latest effort, and you would imagine it’s got to be a fairly significant part of the reason why her first feature in almost 2 decades has, in spite of all of its oddness, landed her a nomination from Oscar.

Just to clarify, said oddness is the good kind of oddness, almost movie making kind. Indeed, as the film starts off fairly slowly, coldly, never spelling things out for you too obviously on screen, and given its setting (a slaughterhouse) is generally pretty ugly, it can all be pretty easy to be put off by. Thankfully it picks up fairly quickly once the two central characters meet (in said roles Morcsanyi Geza and Alexandra Borbely are both magnificent, each excelling at drawing you in through the layers of strangeness that outwardly define them) the vividness of their individual portraits, and the aforementioned odd, offbeat, call it quirky magic that they conjure up in their scenes together create sparks that set a fire under the cold, cruel world in which they exist.

The very strange and sorta twisted romance that plays out across the course of the film is so strong primarily because, as the movies title suggests, it is not just about body, but soul. These characters might not be the standard kind you’d find in a (standard) romantic movie, but because the drive for their relationship comes not from anything externally but what the two of them share intimately, internally the connection that is built between them is more deeply felt, it makes that much more sense.

It is Enyedi’s self penned screenplay that really gives this thing its strength, that elevates it far beyond quirky romantic black comedy into something altogether more unique, both dark fantasy and introspective commentary. It’s in the way she portrays without fanfare the glorious magic that lurks beneath the drab exteriors, finds the beauty in the murk. She finds a very one of a kind way to a say very run of the mill thing, the inside counting more than whatever is on the outside throwing up barriers.

Beyond that it’s in the contrast between the dreams these people have and the place in which they work. It’s a movie with enough respect for its audience to never spell anything out, so what you take from it is entirely up to the experience of the individual, but to me it is to the relationship between the human and animal world what Blade Runner was to the human-machine one all those years ago.

It is that special kind of movie, that which is quirky enough, funny enough, in its own way sweet enough to be so incredibly watchable on a narrative level (though in truth it probably drags and starts to meander a little in its run up to the final act) that you can choose to dig beneath the surface of, or not. It pretty much works purely on a fantasy level even if you don’t. It’s a special achievement, the mark of a great, great artist, and fingers crossed it will do well enough that we won’t have to wait a couple of decades for her to be able to make another one.