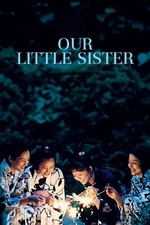 It’s tough to know what to say about a movie like this. The latest from Japan’s Hirokazu Koreeda is a movie that might feel sort of slight if you find yourself focusing too much on the relaxed, narrative journey that it takes you on across its 2 hour run time, but I think the wonder of it is not in the story in which no voice is raised in anger, and no act of violence present to shock the audience awake, but in the details of Koreeda’s self penned screenplay (based on an ongoing Manga).

Small every day incidents like being told you look good in a certain outfit, or tasting a certain food that you never before realized the significance of, get blown up in scale to have movie shaking impact within the context of the story that you’re being told. It’s the one thing missing from so many screenplays every year is the realization that seemingly insignificant details can turn small moments into massive ones. It’s all about the groundwork that the writer lays, and Koreeda is brilliant at it.

He’s brilliant too at coaxing effortlessly natural performances out of his cast, and even more importantly than that in finding actors that he can blend together to the point that you never for a second doubt the closeness or distance or general complexities of their relationships. Umimachi Diary is an ensemble movie through and through, and the quartet of young actresses light up the screen with their distinct charms, with the intimate electricity created via their interactions.

Haruka Ayase has the difficult act of making the most stoic, stern sister sympathetic, and she does it without shedding a tear. Masami Nagasawa has the task of making the most seemingly independent thinking, rebellious sister not come off as reckless or unkind, and Suzu Hirose’s job is slowly, unfussily unfurling the repression, all she’s had bottled up inside of her for too long. They all succeed, and the movie does because of them.

It’s not a hard trick to get right when it comes down to it. Aside from a couple of relatively brief moments where the score pipes up, and you feel like you’re being orchestrated via a moment of corny movie phoniness, this movie works because a great director knew how to direct a great cast in bringing to life his near faultless blueprint of a screenplay. When you handle the essentials this well, such simplicity can be so incredibly immersive, and amount to so much.