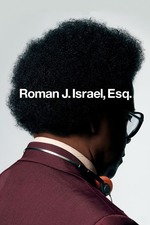 For anyone that saw Nightcrawler, and found it to be the emergence of a major talent on to the cinematic scene, I would say that Roman J. Israel is a sort of sobering crash back down to earth. It’s a movie that is reminiscent of its directors previous effort in a lot of ways, dealing in murky morality, big explored before ideas handled in a slick fashion that makes them feel almost fresh, a tremendous central performance, and supporting one that allows a female performer to fray at the seams, but ultimately this is one of those movies that feels more like the work of someone trying to copy the great work of a great filmmaker, rather than a great filmmakers long awaited follow up to his own great work.

That’s not to say it’s all bad. Far from it. It’s a two hour movie, but it never really feels it, the central core idea that drives the movie, the emotional, psychological journey of its titular character, is an interesting one, and one that for at least an hour or so feels like it’s going incredibly well, and Denzel Washington really is tremendous. A world away from the majority of characters he’s won major plaudits portraying his Roman Israel is something more akin to a sort of Woody Allen character, the kind of lonely sad sack you see Jim Carrey play when he makes serious movies, it’s miles outside of his comfort zone, and yet if you were to turn the sound off you could still be wowed just by the brilliant physicality in his work, the way he stands, walks, gestures, plays with his glasses, you can read the struggle in his body language, and you can read it on his face. It’s Denzel at his best, less titanic and all consuming than he was a year ago in Fences, far more reined in, and yet no less powerful.

No, the problem is definitely not with him (nor with Carmen Ejogo, or Colin Farrell who both do fine work despite neither really managing to maintain their accent through a scene) it’s all in the way that Gilroy’s screenplay takes so much promise, and does next to nothing with it. As I said, the idea at the heart of the movie is a good one, it’s just that the execution is not there as it was in his previous movie. This feels too easy, too simple, and straightforward, the evolution of the character too abrupt, and most troubling of all… The ending is really, really bad. It’s almost like one of those movies that was taken away from its creator, and had an ending stitched on to it by the suits. Like so much of what precedes it the thing is overly simplistic, and just… Too easy. None of the black comic magic or black hearted fury of Nightcrawler, instead simplistic resolutions, and corny denouements.

It’s not a bad movie, it’s just not a good one. It’s a perfectly interesting story, and so that just renders it all the more disappointing when it fails to meet standards you might expect from its early promising stages, or from the pedigree of its creator. It’s more at the John Grisham end of the scale of lawyer movies and less the Anatomy of a Murder end. Too easy, and too comfortable. Still, it remains worth watching on account of the fact that sometimes watching a star do what too few others are capable of can be an experience in spite of everything else.