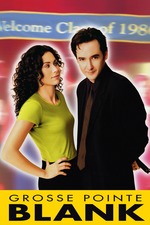 I didn't see this one in theaters, but it came out on home video at a point where I was a hardcore VHS movie collector. I immediately fell in love with it. A black comedy where John Cusack plays a hitman that gets invited to his 10 year high school reunion? With a killer 80's-centric soundtrack? What's not to like?!

It's been years since I've seen this, but revisiting it was a revelation. The opening sets up that we're going into pretty dark territory. I mean, 3 separate hitmen descend on the same target having been overbooked on the job, and shoot the absolute shit out of him? Murder is murder! But once you get past the lunacy of the opening, you quickly realize the unique comic dark tone of this piece.

Cusack is Martin Blanke, who on the night of his prom stood up his high school sweetheart, joined the army, and because of his psychological profile, was handpicked to be a killer. 10 years later, he's a freelance contract killer for hire. But Dan Aykroyd is Grocer, a competing killer that's trying to form a union among the group of trained professionals. Blanke wants no part of it. But he's also for the first time feeling some sort of remorse for his actions. He often says, "it's not me" when he talks about his work.

He decides to go to his 10 year high school reunion to rekindle his love with the girl that got away, reconnect with the friends he had when he was "human" and hopefully find some kind of redemption. The direction the movie goes in completely unpredictable, and only gets funnier and funnier as it goes along. I mean, this is one sharp, incredibly written script! And all the secondary characters get their chance to shine, including Jeremy Piven as Martin's childhood best friend, THE WALKING DEAD's Michael Cudlitz as bully Bobby "Beamer," Alan Arkin as the therapist, Joan Cusack as Martin's assistant, and Aykroyd who just seems to be having a blast here.

Most actors have what I like to call "two-fers" in their filmography. Two movies that they do back to back that are them at the top of their game, and probably their best. (For Bill Murray, who has a LOT of two-fers, it's the one-two punch of GROUNDHOG DAY and WHAT ABOUT BOB?) Here, for Cusack, it's HIGH FIDELITY and GROSS POINTE BLANK.

This movie is perfect.

Land of the Dead