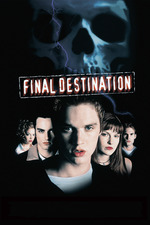 Around 5 years ago, I binged the entire series in a single day. I'm not gonna do this again, but I do want to revisit some movies I've watched from way back, because I'm interested in how they held up and check if I remember them being better or worse than I do now. In this case, in delighted to say the first in the series had aged amazingly well.

Having already remembered the type of movie (and series) it is, right off the bat I knew it's not high art and (thankfully) it doesn't attempt to be. It was a smash hit 20 years ago, grossing nearly 100 times its budget. Many movies from that era have aged terribly, and I'm glad to say this one didn't, mainly thanks up James Wong. He knows extremely well how to build tension and make every scene count. After the plane crash in the beginning, every scene feels like a build up to the next death, thanks to Wong and the editing by James Coblentz. Again, it's not high art, but for what this movie needed- it works very well. It also works well because of great sound design and mixing, which heighten the tension even more.

The acting, although mostly good, feels very 2000-esqe. Despite that, mostly everyone do a good job. Devon Sawa is really damn good, same with Ari Larter and Christen Cloke. Seann William Scott does a good enough job, and Tony Todd is kinda hilarious. Sad thing is, not a single cast member has appeared in a big known movie since that era. The only actor who's had a memorable-enough career is Seann William Scott, as he was in the American Pie films, the Ice Age films and Dude, Where's My Car?.

The cinematography is fine, the score is at times very tense but mostly just decent, and.. That's about it. Gotta love the fact that there's a character literally called Agent Shrek.