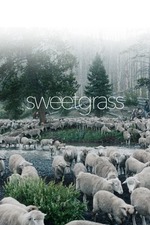 Watched as a double feature with Leviathan, and I can't imagine watching one film without the other. The two movies feel like mirror images of each other; their contrasts and contradictions emboldening and enlightening the focus of both films. The cowboys in Sweetgrass do the thankless work of ranging their herds of sheep through Montana's Absaroka-Beartooth Mountains, and are presented as the leftovers from another time. The workers of the north American fishing industry are a new soulless brand of cowboy, with no romanticized mythos to frame their work. Both workers are at the mercy of their jobs, and while Sweetgrass' linear structure mirrors the national and historical narratives around the American cowboy, the postmodern structure of Leviathan reinforces the lack of such mythology for their workers. The inability to orient the ship's location at any point in the movie, or even orient the camera's location within the ship speaks to a much more depersonalized work.

In the beginning of Sweetgrass, I felt as though the viewer was being associated with the role of the sheep: being led, and directed by the filmmakers through a world we were taking in and getting our bearings in. Over the course of the film, the viewer's role becomes less guided and subservient to the cowboys, and more on equal footing with those guiding their herds. Leviathan starts with much the same idea - the viewer's role is equated with that of the animals. Instead of being led, the viewer is helpless, at the mercy of the lightweight cameras (gopros?) that are fixed to the workers and the boat itself. Subservient to the movements of the boat and the workers, our role is associated almost explicitly with the helplessness and disorientation of the fish being reeled in en masse. While Sweetgrass eventually moves the role of the viewer closer to those of the Cowboys, Leviathan suggests that the workers aboard the ship are just as helpless to the whims of their industry and the machinery as the fish themselves. Their voices are disembodied, tinny, and mostly incomprehensible. Below deck, in the brief reprieves from the noise and violence of their job above, they are shown silent, unspeaking.

Before writing a real review my post was going to be "Whoever directed this must have been smoking some 'sweet grass' when they made this!" and i was really proud of the joke