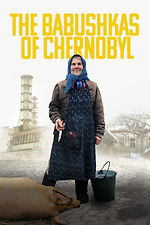 The morbid fascination with Chernobyl often ignores the human impact that came with the disaster. The harm of displacement, the disease of radiation, and the killing of nature that will last millennia is sidelined when urban explorers only want a great picture of the haunted Pripyat.

It's the same with anything that takes us through the looking glass, whether it's the undeniably fascinating yet murderous North Korea, or the adoration for brutalist architecture in aggressively classist ways. For everything morbidly intriguing, there's a sense of guilt that goes along with it.

The Babushkas of Chernobyl tonally shifts between the workers and the returnees. The former are conducting clinical, scientific experiments, planning for future generations regarding the geographical area and our knowledge of radiation generally. The latter are some of the happiest elderly women you'll ever have the pleasure of being in the company of, so devoted to their home that they risk their health for the happiness that comes from being with their Motherland.

Interspersed with the main narrative is some handheld footage of a group making its way to Pripyat. They encounter one of the Babushkas out in the wild and she points to where they want to go. It's like a Disney story. Even though the explosion now seeks to claim the area, the emergence of this lone elderly woman in grainy quality has an essence of all the people of the Exclusion Zone - that they were there before the reactor, before the radiation, and before the tourists. The sadness is in that they won't always be.

But the sadness really is mere punctuation in an ebullient story of strength, perseverance, and singing. Regardless of the risks, every woman is here because they want to be, and it's clear they're happier than had they stayed displaced. The people removed in the days following the explosion are dying younger, and one doctor suggests anguish is a bigger killer than the radiation the women are exposed to.

Despite their remote community, these women are as warm as any cheery group of pensioners you can imagine. They jest, drink, complain about men, and are just as mischievous as they had been in their youth, particularly when one Babushka brings her illegal moonshine to be blessed at the one religious event of the year.

But the anecdotes about the night of the tragedy, the warning signs throughout the Exclusion Zone, and the heavy presence of governmental officials are reminders that the women are persevering as much as living. They could have lived happier lives without this, no matter the inspiration we can find in their new normality. It's also a story about women by women (Holly Morris & Anne Bogart), ensuring an empathy and understanding, when it'd be easy to be incredulous or mocking.

It's that respect for everything and everyone involved that makes The Babushkas of Chernobyl so great. There is much to be celebrated about a small elderly community having the energy and fight to reclaim what is theirs, and the film never forgets that the backdrop to this is a terrifying event that impacted millions of people. It invites you to adapt to the new environment, and to make the best of it by enjoying what can be enjoyed, but all the while, never forgetting.