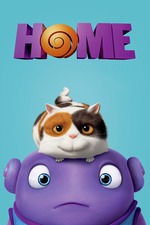 What's up everybody, it's me, the biggest Dreamworks Animation fan in the world. Home (aside from Trolls which I will be watching imminently) is one of the only Dreamworks films I had never seen. And honestly I kind of wish I hadn't bothered. I guess it really is surprising considering how epic and funny Jim Parsons is on the Bang Bing Therum on television, alongside how much I enjoy Rihanna and her wicked beats.

The story here is about a race of aliens called the boobs, who are scared. Rihanna then helps each other. The gimmick is that the boobs speak in a weird dialect so they all sound like they have learning difficulties. It gets annoying fast. The hair animation is quite nice for baby Rihanna despite some very dull blocking and locations.

There's a weird scene where baby Rihanna listens to a Rihanna song, it's meta. Like Rick & Morty. The music fucking sucks.

I was enjoying a glass of cat milk while watching this movie, which I thought was worth noting.

It annoyed me how much it contradicted the lore of the prequel novel (as well as it's sjw agenda), I have a feeling the Home superfans are going to be pretty angry about this. It's cute at times but when it made me bored and angry I kicked my dog really hard, so in a way this film is responsible for animal abuse.

It's films like this that are the reason everyone laughs in my face when I try to tell them how awesome Kung Fu Panda, How to Train Your Dragon and Madagascar 2 & 3 are. Me have sad face now, me has reasons to be upset that no ones listen to I.