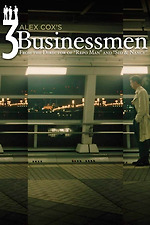 Four stars? "But Jack," you say, "this film is just two guys walking and talking. Proper boring innit." To which I say, aha, but as the title implies, there is a third guy in the third act! Additionally, from Before Sunrise to The Color Wheel, walking and talking movies seldom fail to hit the spot for me. Although I admire his indie ethic, I've always found Alex Cox's movies a little loud and brash for my tastes (Straight to Hell and Repo Man are like a double-dose of brain hemorrhage, although I should watch the latter again for the sake of Harry Dean Stanton) but here he pares his style right down, telling a languidly amusing road story with some of the elegiacally neon-lit cinematographic grit of a Michael Mann film. To dispense another analogy, the filmmaking here is as lo-fi and gorgeous as a Neil Young guitar solo. Most exciting aesthetically is Cox's ultra-naturalistic decision to avoid the kind of cutting that makes movie storytelling predictable (ie. character mentions item, close-up of item) in favour of long, moving shots; the DVD booklet tells how there are only 102 cuts in the whole film. The feeling of constant motion (which gives mundanity a proper momentum) feels indebted to Linklater, but also other indie filmmakers of the era, like Spike Lee and particularly Jim Jarmusch, not least because there's a surreal element of Night on Earth; as its protagonists ramble along their nonsensical path, at first you will be curious as to when LIverpool became so diverse. The script by Tod Davies seems to come from a left-wing place typical to most Cox films (for example, the scene in which the two main businessmen, played by Cox himself and Miguel Sandoval, wonder who's buying a showroom's expensive cars) but beyond the anti-globalisation framing of the story politics are largely eschewed in favour of mundane character details. Do businessmen often read The Guardian?

Next Cox film to watch; Highway Patrolman. Makes me think of the Bruce Springsteen song, but Sean Penn already adapted that into The Indian Runner.

If you liked this watch Mike Leigh's Naked, Mann's Thief or Night on Earth.