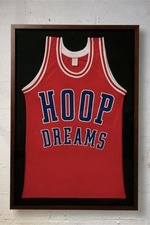 Starting about halfway through...I wasn't aggressively twiddling my thumbs, but I was twiddling them.

I seem to be one of few people to believe Hoop Dreams fails as a documentary, but I think it does because it tries to be both an entertaining narrative and a documentary and perhaps because it focuses on two different stories while doing so. The narrative isn't particularly entertaining, so director Steve James (let's say) feels the need to build suspense for some of the basketball games. (I doubt the games are the only culprit, but they're a good example.) The basketball games, beyond perhaps a minute or so to see how the sport is played at the high school and college level, add unnecessary length to the documentary.

Fiction has produced works that take both documentary and fiction elements and blend them well; documentary probably has too, but I'm not well-versed enough to know of that. I can point to Altman's Nashville as an example of the fiction group. It uses mostly professional actors who are mostly improvising to feel real, but it practically abandons suspense and action. The final scene is built up in the sense that we know there will be a concert, but there's no suggestion that anything will go wrong until David Hayward starts fiddling with his fiddle case. (In fact, the amount of suspense that is present in, say, the more recent works of Alejandro González Iñárritu may explain why I dislike that genre. But that's a story for another time.) Sure, real life comes with its own form of dramatic tension/suspense, but it isn't constantly building toward the end or building from the beginning or anything in particular. Professional sports may seem an especially tense occupation, yet everyone has to deal with stress and deadlines and the next thing on their own scale and we don't feel that most of the time. Anyway, that's one of the elements that that movie sacrifices in order to work well as a kind of hybrid (call it 80%, 90%, however much you want on the fiction side, it's still a hybrid).

So yes, there are good examples, and one good example doesn't just throw everything together haphazardly. The bulk of the fictional side at least is represented by the typical Issue Piece, which dramatizes (however loosely) true events or makes up fictional ones to try to comment on some specific topical issue. It comes with its own set of adjectives like "emotionally manipulative" and "preachy." (I could name many examples like Lee Daniels' The Butler, Fruitvale Station, or some I haven't seen e.g. Extremely Loud and Incredibly Close. For that matter, basically any movie that intentionally and unironically falls into the genre of "hyperlink cinema" which I alluded to in the preceding paragraph. The criticisms will probably be the same.) But what the Issue Piece does that's wrong is just project the ideas of documentary onto the fictional narrative format without any consideration of the consequences. There's pruning that has to be done, and consciously, in order to make the movie good.

Hoop Dreams is documentary's mirror image of the Issue Piece. It takes a couple of true stories and presents them like it would one extravagant work of fiction, incorporating many of the tropes of fiction that don't apply to real life. It doesn't throw anything out, so the documentary value and the narrative entertainment value are both diluted. What makes Hoop Dreams in particular bad, rather than average, is that its real life stories consist of around half a dozen sub-stories, which would be deemed similar in narrative structure if they were fictional, and yet James has to give the pseudo-fictional treatment to all of them. In other words, sure, in real life each year of a person's life probably does deserve the same weight, but that equal treatment should be sacrificed so we can understand the lives instead of just all the little stories. Or, the narrative elements could be cut so we could just watch these kids go through similar events over and over but stay focused on them. But nothing is pruned, so to speak, so neither function is fulfilled.

I'm sorry if that got a little abstract or even seemed to take on a pretense of technicality. But to sum it up, Hoop Dreams intends to be both a blockbuster narrative and a documentary, which makes it a poor hybrid of the two. And where it might just be yet another forgettable movie that relies on the truth of its story to be meaningful, it's also twice as long as it has to be, which is a pain.