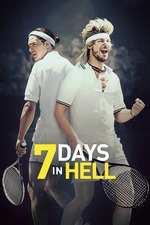 There's not a lot to say about 7 Days in Hell apart from the fact that HBO has managed to capitalize on what might become one of the most entertaining new television-movie concepts in recent memory: the sport mockumentary.

7 Days in Hell isn't comedy gold from start to finish, but its 50-minute runtime keeps it short enough to make any complaints about the film's comedy negligible. Not every joke lands with a brilliant comedic punch, but what has to be appreciated is how 7 Days in Hell never stops trying, throwing joke after joke at its viewers, well-aware that even if half don't land, its probably thrown more comedy at you than your average 90 minute Apatow film.

Borrowing heavily from the likes of Tim & Eric, 7 Days in Hell lets its stars Andy Samberg and Kit Harington shine through self-aware low-brow humor. However, the film is actually at its strongest when it plays its jokes visually, without any comedy provided directly from its leads. The finest comedic moments occur on the court because unlike its fake interview segments, it is bringing something completely new to the comedy landscape.

As viewers, we are well accustomed to having an expectation when watching televised sports. Consequently, breaking these expectations can lead to comedy gold. This idea of going against the grain is old-hat, but its clever to think of it from the perspective of a sports match, because it's something that's so universally understood.

Watching something as innocuous as tennis is hilarious in 7 Days In Hell because the viewer has no choice but to follow the ball. The viewers eyeline is only interested in whats actually moving on screen and consequently, when the ball ends up in ridiculous places, it's actually a brilliant example of reinventing visual comedy.

Whilst 7 Days in Hell might not be a comedic masterpiece of any sort, it represents a step in the right direction for comedic filmmaking. If HBO continues with this trend, they might eventually hit the jackpot, especially if they tackle a sport like soccer or golf.