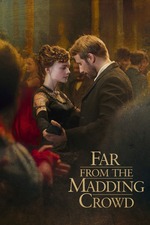 Far from the Madding Crowd

It's a rare sight these days to find a romance that grabs its audience with a sense of unadulterated passion, and it's even less likely that one finds a period piece that doesn't feel dated by today's standards. In simplest terms, Far From The Madding Crowd is a film that basks in its romance. It's traditionalist and arguably naive, but in a blissful sort of way. Through its pristine direction and fantastic performances, Far From The Madding Crowd elevates its breathtaking cinematography to paint a timeless and sincere portrait of love and commitment, resulting in a rare release for 2015 cinema, an era that's over-saturated by abrasive comedies, garish action and handheld indie cinema.

Adapted from the 1874 Thomas Hardy novel of the same name, Carey Mulligan plays a beautiful, but independent young woman who struggles between the adoration of three men all whilst attempting to run a farm that she recently inherited. Mulligan's performance is beautifully subtle but beaming with a youthful exuberance that feels reminiscent of cinemas best Jane Austen adaptations. But what's truly fantastic is how Mulligan's co-stars all perform with a sense of quiet adoration. Perhaps the films most modern attribute, Far From The Madding Crowd abandons the long monologues on love for subtle glances and short bursts of envy, ecstasy, and despair.

But what helps this film evolve into a classical painting that's come to life is its visual execution. Nothing about Far From The Madding Crowd feels lazy or executed without clear intention. Every image is absolutely astounding and the camera captures the British countryside almost as brilliantly as Kubrick captured England in Barry Lyndon. Every shot is timed with precision and as with many of these period pieces, shots are lit to mimic a classic painting. But what's truly outstanding is that these shots aren't just framed and lit beautifully, but they also are controlled with taste, going so far as to having some of the best use of zooms in contemporary cinema.

Although this 2015 release falls a little short on being consistently compelling due to getting carried away in its own aesthetic beauty, it's a film that is ambitious in scope and represents a different understanding of the term "epic". Far From The Madding Crowd is large and full of love: love for its characters, its setting, its story and its themes. It understands how to capture its narrative to its best ability, and most importantly, it never forgets that it's a film. Where most period dramas result in films that would often have best been left as a book or theatre production, Far From The Madding Crowd is an indisputable example of what it means to make a period romance that was supposed to be a film and nothing else. It's beautiful, tragic and heartwarming in a wonderfully classical way, and will surely go down as one of the overlooked highlights of 2015.