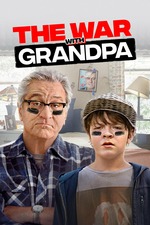 Good cinema comes in all shapes and sizes.

Because goddamn The War with Grandpa is one hell of a picture.

What may look like a very standard kids film on the surface makes out for being an excellent companion piece to last year's The Irishman.

Here we have the character of Ed, portrayed by De Niro, who shares so much of what the character of Frank goes through in the latter picture, as both of them face the same hardships of growing old alone in their near futures.

You see, they both have lost everything in their lives, and now the only people who love them are entirely perished by his past wars' actions.

It is now where he faces enormous repercussions, such as the chaos he experiences as he goes into battle at a Sky Zone Dodgeball Tournament against his grandson.

And I haven't come to the brilliance that Christopher Walken brings to the screen, in his first role with De Niro since The Deer Hunter, as I couldn't even explain to you how much suspense there was when you watch the scene where he rides a one-wheel board with his hands in the air.

Because I'm telling you, it will make Abel Ferrara have a panic attack upon his viewing.

The less I say is better, as I don't want to ruin all the surprises it has in store for you guys, because unironically I actually had a good time watching this.

I mean De Niro is on a fucking roll with this and The Irishman back to back.