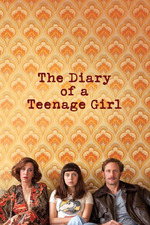 The Diary of a Teenage Girl

”She was a young girl driven astray by the lustful lure of the flesh.”

Marielle Heller makes this an awesome film about a teenage girl having an affair with her mother’s boyfriend. Bel Powley is great as Minnie and Alexander Skarsgård is about as sleazy as his name Monroe suggests.

What strikes me is that even the adults are acting like teenagers. Maybe that’s why the weird relationship between a 15 year old girl and a 35 year old man almost seems acceptable? I don't know, but I know I loved this movie.

All in all, a very human and honest coming of age drama, filled to the brim with great acting, true stories and cool cartoons (it's based on a semi-autobiographical graphic novel by Phoebe Gloeckner).

If you like ”Juno” and ”Ghost World”, this is definitely for you.