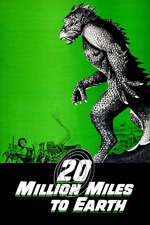 They always managed to squeeze in something of a romance, didn't they? If you want to see a stop motion wrestling match, in the streets of Rome, between a giant Venusian monster and one of the biggest earthlings, the elephant, this is your chance. I was rooting for the alien to be honest. A quote: Actually, they're not ferocious unless they're provoked. And from that moment on everybody, and I mean everybody, provokes the poor thing. Even animals. Bad news for the extra terrestrial creature, because the fifties had only one answer to otherworldly threats. Firepower. And if that doesn't work, more firepower. And if that, et cetera. All the way up to flame throwers, grenades and bazookas. I'm not sure what the lesson is here. The beast seemed pretty calm, nibbling on some tasty sulfur. Now the Roman ruins are in ruins. Oh well, at least Calder got his date..