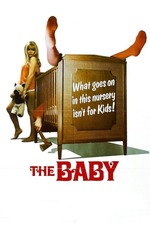 Baby was born backwards, he's been that way all his life. That's all there is to it.

When you find a movie from the seventies with a review that says 'disturbing', you can bet it will be exactly that. And so is The Baby, a film that deals with, you guessed it, a baby. Nothing strange so far, except that this baby, aptly named Baby, is twenty something years old and still acts like an infant. Mom, who is a little overprotective, takes care of him, together with her other children. Two lovely daughters, also somewhere in their twenties, and they react differently to their brother. Something's wrong here and so thinks the new social worker, who really sinks her teeth into the case.

Sounds enthralling and it is. I really loved the acting of the women. Much like the tone of the movie a little weird, but not too weird. Nothing and nobody completely loses touch with reality, which, outlandish as it all may be, makes Baby's ordeal quite unsettling at times. The movie loses a bit of its momentum after about an hour or so, but the screenplay still has a trick up its sleeve. Another social worker went missing, right? As if it takes off its gloves at this point. It might lose a little value and meaning from here on, but it makes up for it with sheer fun. The third act is a jaw-dropper.