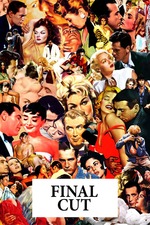 A film in theory and a theory of film that posits with its very existence, in a style that is unpretentious because it is so effortless and original, as pop as it is art: What even is film? Insofar as film is a medium, then here film is the medium itself, utilized in the same fashion as mashup DJs use records as their instruments (rather than the instruments on the records), treating the medium itself as a slippery signifier divorced of a set signified. Insofar as film is a specifically *visual* medium, as so many theorists claim and as silent films speak to, then here we have an unmistakable story being told narratively and emotionally using no consistent visual cues, with no uniform aesthetic language, not even with the same actors or mise-en-scène from one moment to the next, appropriating the iconography of Hollywood in ways that are often surprising and subversive as the film re-contextualizes images familiar to cinephiles to novel ends. Insofar as film is said to be a director’s medium, the art of the auteur, then here all original authorial intention goes out the window as the editor, the arbiter of the filmic Real, the real reel and the reel Real, comes to the fore.