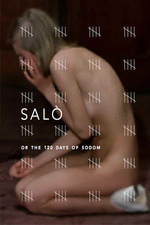 Lasciate ogni speranza voi ch'entrate: What is it about Pasolini's profoundly traumatic and transgressive final film that makes it so impossible to talk about and yet impossible to not? In demanding both appalled silence and prattling disquiet from the audience, uneasily holding the viewer in a vice-like grip between the vices of seductive beauty and repulsive brutality, the film, like its gang of loathsome fascist libertines, speaks not to the oppressive chains of desire, but from a psychoanalytic perspective, the far more resilient and vicious vicissitudes of drive, a libidinal circuit and truly hellish circle that locates psychical enjoyment not in erotic satisfaction but in its perpetual denial and frustration. To this end—which is not an end at all, after all, but an autonomous machine of ouroboric onanism, self-gratification for its own selfish sake just as fascism hungers after power for power's sake—the film sets for itself an impossible task, setting its sights on what Lacan would call the unmitigated Real.

Whereas lesser exploitation movies and torture porn, while no doubt portraying ever more repugnant suffering and atrocious depravity, truck in the realm of the nightmarish Imaginary, playing on our agonizing fears yet offering an absurd sublimation and means of disavowal or escape in their phantasmic, overzealous realization and conventional protagonistic narratives, Pasolini is far more perverse (if not downright psychotic) in seeking to directly bring the Real into the Symbolic: In that, it's a borderline snuff film, as a friend suggested. With camerawork that is unflinching yet unspectacular, restrained in the knowledge that one does not need extreme closeups or jarring cuts to heighten such extreme violence, the film is as difficult to enter as it is to escape, lacking a point of view we can identify with: We are at one and the same time the victims, with these horrors forced upon us, and the villains, with these miseries staged for us, as the voyeuristic final act indicates. The effect of such distancing, like the contractual relationship that undergirds a BDSM dialectic, does not lessen what terrors are on display but makes them all the more powerful and realistic, with this heinous ordeal occurring all on its own and without our say, the foreignness making it all the more fascinating to our cursedly curious imaginations.

All that would be left, beyond the gaping whole of the trauma that must (not) be filled with words, would be to cast the film with contemporary degenerates, with Donald Trump as the President, Harvey Weinstein as the Duke, Alan Dershowitz as the Magistrate, and Jim Bakker as the Bishop. With special appearances featuring Hillary Clinton, Ghislaine Maxwell, and the great storyteller Bill Cosby as the madams, Ivanka and Chelsea playing their parts as the daughters, as well as an organization like the neo-fascist Proud Boys acting as the paramilitary blackshirts (which they already try to be). One might easily call the resulting remake Little Saint James, or 120 Tweets of Sodom.