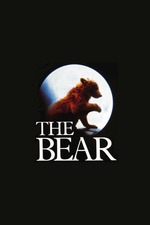 On its own terms—which are less words than they are a grizzly vocabulary of grunts and growls and roars and snores—the film is an extraordinary creative achievement that leaves one as much in wonder of the terrible magnificence of the natural world as in wonder of how it was so seamlessly made. On the other hand—or, in this case, the other paw—with a little reflection—a cognitive trait traditionally limited to only human subjects—it is easy to see the production’s seams, the movie’s major ursine stars being bears only biologically, but psychologically acting more like humans in hairy suits. In her contemporaneous review, no less than Janet Maslin said much the same, writing that the film’s “true emphasis is not on wildlife. Instead, it grafts the thoughts and dreams of more commonplace beings onto bear-shaped stand-ins.” For all its ambition, Annaud’s impressive direction, and the sense of awe it evokes, the film ultimately undercuts its own aim as it retains the unquestioned human being for its true subject, its uncommon anthropomorphic protagonists—who dream and grieve and even trip just as we do—baring the conventional mark of anthropocentrism, with the survival of the hunted serving the character arcs of the hunters.