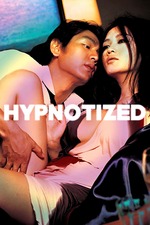 Hypnotized aka Eolguleobtneun minyeo(meaning Faceless Beauty) is a psychological thriller starring Kim Hye-soo as Ji-su, an author with a borderline personality disorder.
A year after her short stay in a mental institution she encounters her old doctor Seok-won, who wasn't able to help her. They become friends and although she's still in her troubled marriage they start an affair, aided by Seok-won manipulating Ji-su with hypnosis.

I was quite surprised to find out that as of now, ten years after it's release, this is still only the second film from writer/director Ki In-shik.
He presents the doctor/not patient anymore relationship in stunning fashion, sometimes aided by tasteful CGI in surreal sequences, but more often by voyeuristic tracking shots and camera angles that, with a focus on mirrors and windows between the viewer and the characters, reminded me of Rainer Werner Fassbinder.
Add to that the modern architecture of Seok-won's new office and the stunning Seoul nightscape, the fantastic balance between Kim Hye-soo's troubled, yet seductive Ji-Su and Suk-won's introverted loneliness that makes him take advantage of her in the first place, and you get a great thriller with stunning design.

It's not just an interesting look at the doctor-patient relationship, and the trust that goes with that, but also asks how far one would go to fulfill one's desires. Not just the sexual ones, also simply the need to have company, to be loved. And how much is that worth if you trick a person to like you? What are the consequences?

In Hypnotized it certainly has consequences and results in a great thriller that plays with the viewer's perception as much as with it's character's perception. It's not about revenge but desire and manipulation and that makes it even more interesting for fans of South Korean thrillers.