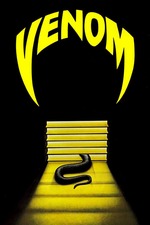 A trio of bungling kidnappers' attempted snatching of a retired safari guide's grandson happens to fall on the same day the boy accidentally brings home a deadly snake. That's a misleadingly nutty synopsis for a hostage procedural that mostly plays like an ABC Movie of the Week, albeit rather a fun one. Save for a blusteringly drunk Oliver Reed, the marquee actors are a tad more subdued than one might hope, but Nicol Williamson makes up for that as a delightfully disdainful police negotiator.

Y'know the old saying about a film being successful only if it's more interesting than watching the same actors having a dinner party? I suppose it's possible that a movie could exist that would be more fun than watching Klaus Kinski, Sterling Hayden, Susan George, Oliver Reed and a black mamba sit down to eat, but this isn't it.

The Curse of the Screaming Dead