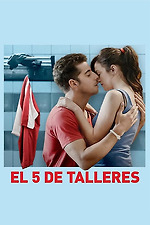 Although ugly shot —the whole film looks like a commercial— it’s a rather fun, sometimes charming affair with a plot that’s unlikely to forget for its uniqueness. The two leads are well cast, nailing the right chemistry on screen required for this to work (surprisingly, off-screen they were also a couple at the time).

In the sports genre, soccer is generally seen as a weak subject, but this film proves there’s no such thing when there’s a good story behind.