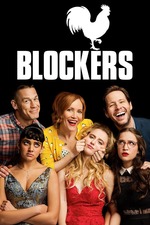 In her directing debut "Blockers" (in the German version "Der Sex Pakt"), Kay Cannon, who as a screenwriter has written all three "Pitch Perfect" films to date, celebrates Prom Night as what it has always been in American films: a myth. A symbol for the fact that High School is now finally over and nothing stands in the way of the next step, which ideally leads to college. For the three girls, around whom Cannon's film revolves, the upcoming prom is to become nothing less than a memory for life, an unforgettable evening full of memorable events that can still be reported decades later. For Julie, Sam and Kayla, however, Prom Night means above all else that they want to finally lose their virginity that night at the latest.

Thus, "Blockers" already shows a pleasurable chaos because of the initial situation alone, because without embarrassing situations and unplanned surprises, the way to Prom Night as well as the actual evening never goes off. Cannon's film debut differs here from the well-known comedies like Superbad, which follow a very similar theme, in that this time the focus is not on hormone-driven boys, but on young women who simply want to insist on their right to have sex. "Blockers" thus deals all too clearly with social double standards, in which boys are celebrated for having slept with someone for the first time, while the girls are protected by a protective reflex against losing their virginity too quickly. The director of the movie also can't find a reason for this.

Instead, Cannon takes up the absurdity of this fact, as the parents of the three best friends turn out to be the real children, in contrast to their adolescent children. Totally overwhelmed by the fact that their own offspring could possibly go to bed with a boy, Julie's mother Lisa, Kayla's father Mitchell and Sam's father Hunter do everything they can to keep the three girls from their plans. While Lisa, a single parent, is mainly afraid of being left alone by her daughter when she goes to college far away, muscle-bound Mitchell turns out to be as overprotective as he is sensitive and regularly bursts into tears when it comes to his Kayla. Hunter, who split up with Sam's mother after allegedly cheating on her, is dragged along involuntarily by the other two parents. In fact, he has known for a long time that Sam doesn't like boys and is in fact a lesbian.

Even though the humorous moments of the movie don't stop at the three best friends as soon as alcohol comes into play or drugs are experimented with, Julie, Sam and Kayla are seldom the target of the gags, which range from shallow situation comedy to rough jokes below the belt. Here, the teenage girls are rather those who, despite isolated escapades, consistently head for their goal and do not let themselves be distracted from their intentions. It's quite different with the girls' parents, who, through their hasty, imprudent manner, get into one weird, unpleasant or crazy event after another.

Yet, Cannon's movie is by far less offensive and border-crossing than it obviously would have liked it to be at times. Scenes like the one in which the parents randomly follow the chat progress of the girls and gradually get behind the meaning of the different emojis used, are however just as entertainingly timed as the general appearance of John Cena, who in his role as Mitchell always manages to grab whole scenes. The way the massive body tension of the giant muscle man is regularly buried under the astonished, overstrained or desperate mind of his father, is at times actually pure comedy gold, through which the ex-wrestler finally proves to be a true comedy star.

Apart from these entertaining moments, "Blockers" as a whole follows the well-trodden narrative paths, which at the latest at the end lead to conventional pleasure and an exaggerated need for harmony. As a sympathetic variation of well-known genre elements, Cannon's film has the necessary heart, as the director stays with the three teenage girls until the very end and never takes away the dignity of her characters. Despite prom night chaos and adults who are the most hysterical, Julie, Sam and Kayla are anything but immature offspring. At the end of the prom, they are the ones who comfort or cheer up their parents, while the young women have long been ready for the next stage in their lives.